Christmas: a magical time for everyone

Christmas is a magical time for everyone, often expected all year round, especially by children. In fact, it is no coincidence that the attention in this special period is entirely directed to them: gifts, advertising, images of joy. 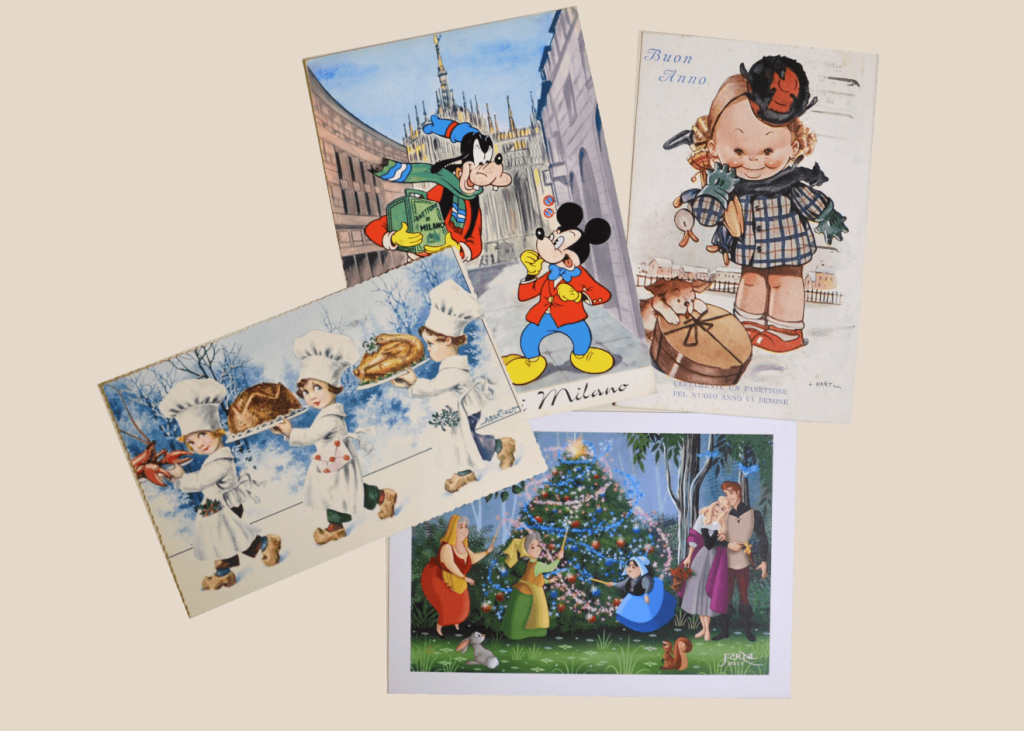 The Loison Museum houses a collection of over 350 postcards, and among these there are numerous dedicated to Christmas. From the oldest to the most recent, we have selected 4 postcards that well represent the type of Christmas postcards.

The first is a vintage postcard depicting three little chefs carrying their delicacies on large trays, all lined up in the snow. In the center, preceded and followed by rich dishes, is the panettone, the king of Christmas, which is solemnly brought to the tables.

No less interesting is the second postcard we have chosen, the most beautiful of this selection. An example from the 1920s or 1930s, a true document of an era and its tastes. The little girl, well dressed and holding a puppet and a parasol, drops a box of panettone into the snow. The box is nothing more than an elegant, well-tied hatbox, evidence of its diffusion in the pastry sector.

However, postcards intended for children can feature cartoon characters; this is the case of the last two examples. The third postcard is a curious souvenir from Milan, featuring Pippo and Mickey Mouse, tourists in the metropolitan city. There are two characteristic and clearly visible elements: the Duomo in the background with its spiers and the panettone, the symbol of the Lombard capital and its production and confectionery history.

The fourth postcard differs from the previous ones which, although it portrays different cartoon characters, does not contain the representation of the panettone. In this postcard, the characters of Sleeping Beauty are gathered around a Christmas tree that is magically decorated. The magic of this period is what unites the ideal world with the imaginary world of children, thus amplifying all the charm that this festival has always produced in their eyes.