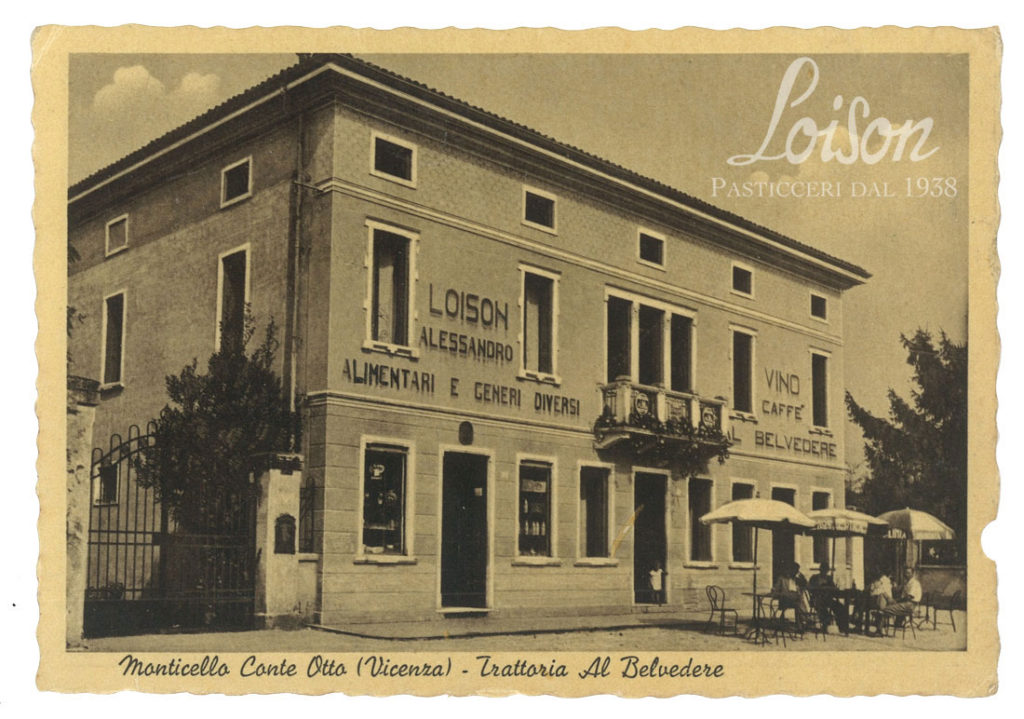 It is in this building, located in Monticello Conte Otto, that our story begins.
The family residence is on the second floor, above the shop.
from here, Alessandro Loison runs his business, selling groceries within walking distance of the town’s city hall. He is married to Lucia Negrin, with whom he has five children: Mafalda, Sandrina, Tranquillo, Domenico and Dolores.

Tranquillo Loison was born on July 30th, 1908, in Monticello Conte Otto, a small town on the outskirts of Vicenza. At a young age, he begins working as a baker and, when he is just seventeen, he compiles his firstrecipes: on a small blue notebook, he jots down the ingredients needed to make bread, cookies and a few simple traditional cakes. In the twenties, he works in a bakery that he is renting in Bastia di Rovolon, in the province of Padua. There, he learns the secrets of bread-making.

The bakery in Motta

On the advice of one of his uncles, Tranquillo buys a small bakery from the Manni family. It is located in the hamlet of Motta in the town of Costabissara and he moves there with his family. In the thirties, he passes on to his son Alessandro the passion for the art of bread-making. The boy is happy to help his father in the shop. At the age of ten, Alessandro begins making his first home deliveries on bicycle, before going to school. The war years are difficult and, during the occasional absences of his father, Alessandro helps out his mother Lucia.
The market adapts to the needs of the rural life. Days and sales are in rhythm with life out in the fields, with wake-up at dawn and deliveries running up to the hills. Fresh bread for the farmers’ breakfast and lunch, and, if one wanted to make some additional money, one had to find customers outside of town.

I would bake bread, deliver it around town and then go to my fifth-grade class. At the age of ten or eleven, I started working with my mother, because my father was in Rijeka, fightingin the war. Then he finally came home. While he was away, I worked and went to school .” (A. Loison)

World War II has had an impact on the economy. The revenues from the sale of bread at state-controlled prices barely guarantees the livelihood of the family. So, encouraged by the teachings of his father and by the requests of his customers, who want more than just bread, Alessandro tries some recipes and begins making pastries and spreads. His first confectionery experiment is the San Martino cake, based on a recipe suggested to him by a friend from Verona. Some of the first leavened products made in the Motta bakery include plum cakes and doughnuts, either plain or filled with raisins. 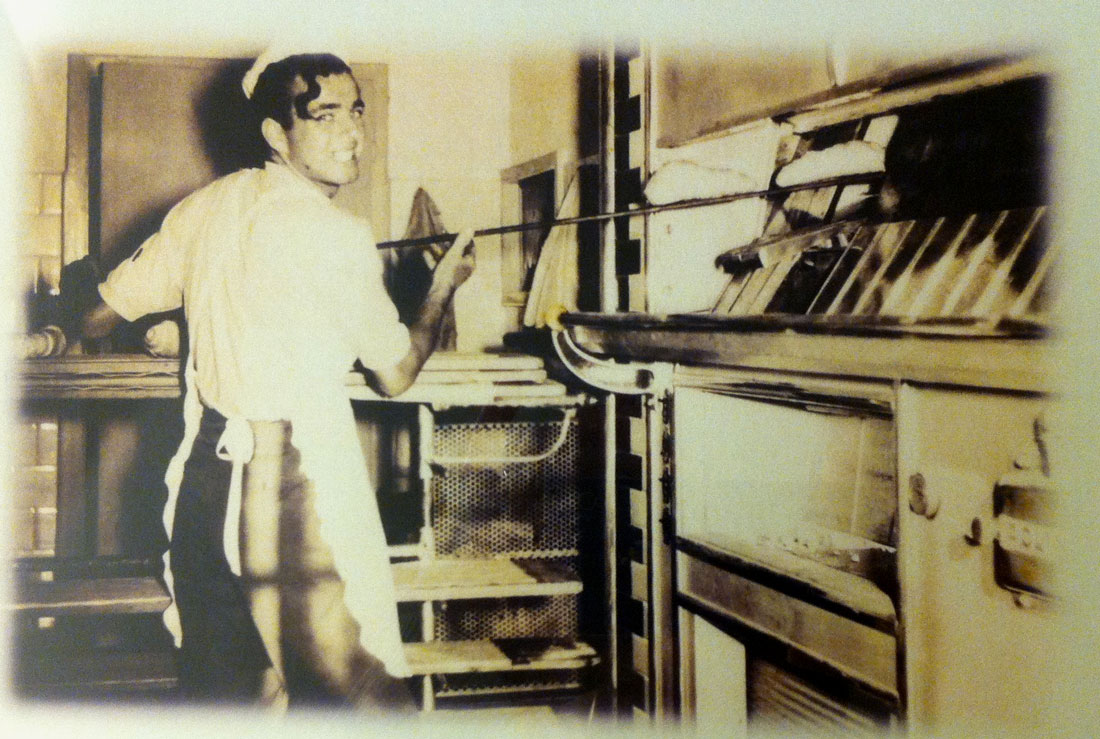 We had competition even back then and we had to somehow come up with new ideas to get by. There were four bakeries in Costabissara and then there was us in Motta.” (A. Loison)

One day, the Panettone recipe rolls into town…

The workshop on Via Chiesa begins making tiered wedding cakes, by now in high demand for ceremonies held by residents in town and in the province.
On Saturdays, Loison delivers cakes for up to 10 different weddings. Meanwhile, during Christmas season, Loisonintroduces some baked goods for the holidays, including meringues, zaletti and pevarini cookies. One of the specialties made by Loison back thenis brittle, consumed mainly at the local festivals and loved by children and adults alike. Holiday sweets are simple and scarce, until the day the recipe for Panettonecomes into the picture. The baking experimentsthat Alessandro makes to perfect the recipe, the dough and the leavening almost remind us of the Milanese legend behind the Pan de Toni, the sweet bread made at the court of Ludovico il Moro by a young servant who is considered to be the inventor of Panettone.

A company is born 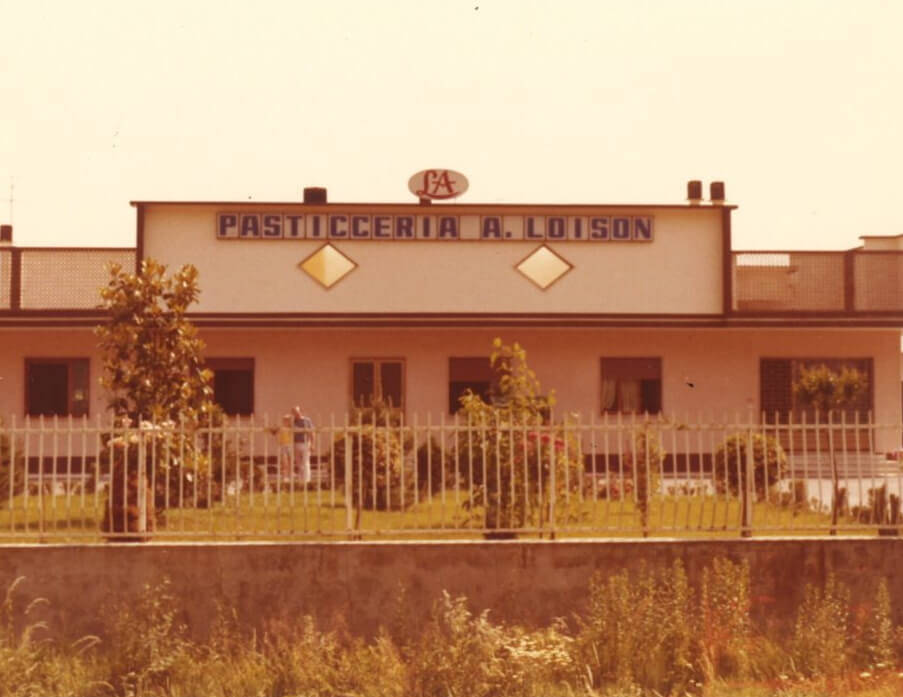 These are the years of economic boom and, on May 28, 1969, Alessandro Loison puts down a deposit of one million two hundred thousand liras for the purchase of a piece of land in the suburb of Motta. The 5,000 square meters will later on be part of an industrial development plan. The company starts growing, but still holds true to traditional recipes handed down from father to son. On the first floor of the building, the family lives next to the pastry workshop and welcomes in the first two employees of Loison. In the seventies, Alessandro buys ovens and machinery for dough- and filling making.
In those years, the production consists of traditional baked goods, especially leavened baked products and sponge cakes, such as pastries, brioches, doughnuts, Margherita cakes, trifles, fruitcakes and jelly rolls. 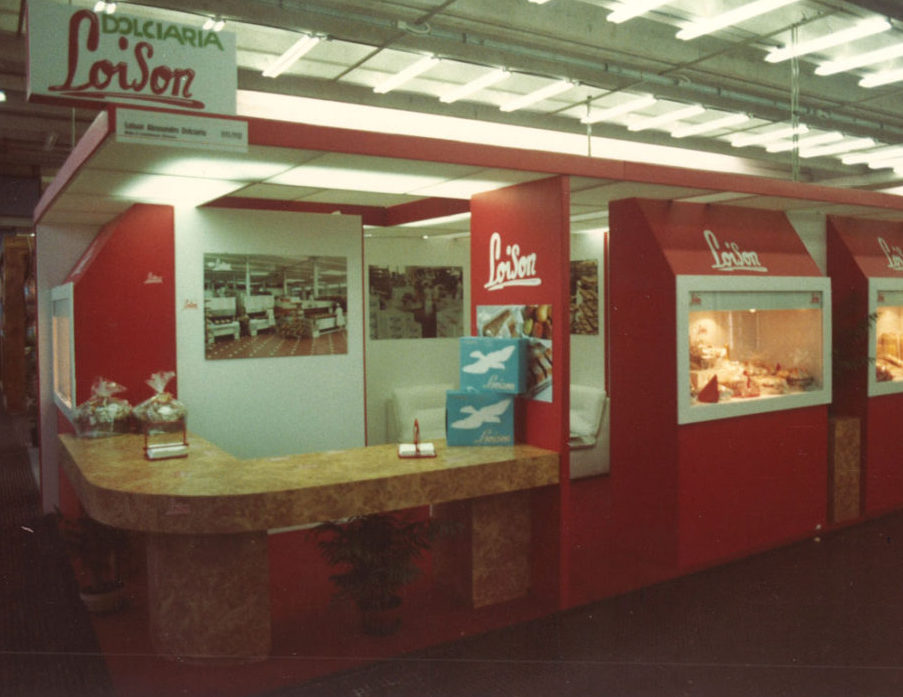 The first corporate logo is designed in the seventies. The graphic image features the family name in bright red. The company is known as Dolciaria Alessandro Loison (or LA).
With increased production and specialization in fresh pastries, Loison begins receiving its first recognition.
In 1974, Loison receives the Targa d’Oro delle Tre Venezie award and, in 1979, the Mercurio d’Oro award for the market value, the entrepreneurial spirit, the quality and the professionalism of the company.
This award used to be bestowed to Italian companies to reward their efforts in helping to form the identity of the country.

The decade of the nineties marks the beginning of an era of great changes within Loison. The turning point comes with Dario, who builds on the experience gained during his business trips abroad, helping the business move forward. His marketing and communication strategies ensure that his company prevails over other Italian firms. First, he improves the organization of work and focuses on the production of holiday sweet breads, such as Panettone, Pandoro, Focaccia and Colomba. Working alongside Dario is Sonia Pilla, his sophisticated and attentive wife. Her experience as an interior designer enables her in a few years to create the unique style that makes Loison’s packaging stand out among the rest. Her brand will develop into Sonia Design. 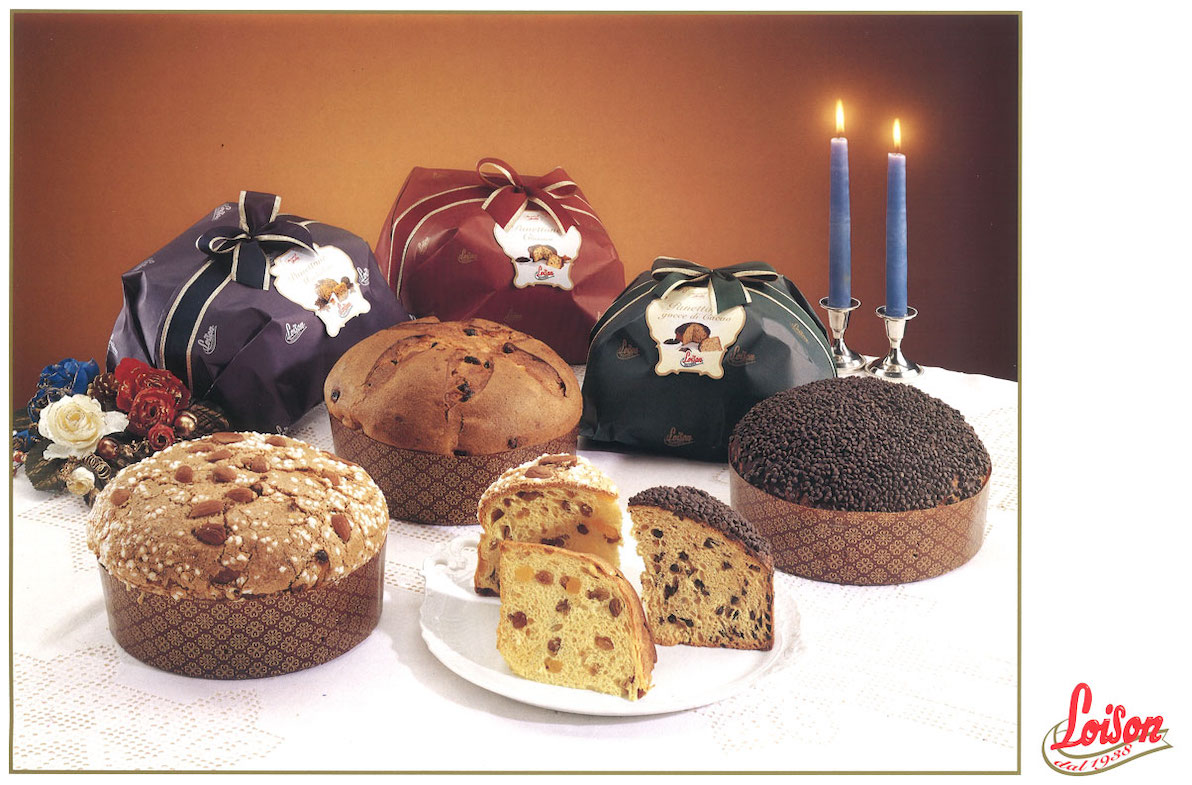 The commitment with Slow Food

At the end of the nineties Loison decided to join the Slow Food reality committed to giving value to food by safeguarding small productions of gastronomic excellence, the environment and ecosystems. The collaboration began with the purchase of an associative package in 1995. It could not have been otherwise, given the close correspondence of values such as attention to good food, the scrupulous choice of raw materials, the search for excellence and commitment also on the ethical level. From this collaboration Loison acquires new lymph to innovate and to be able to create unique products. Today Loison proudly continues to be part of this network as evidenced by the use of numerous Slow Food presidia in its products such as: Ciaculli Late Mandarin, Mananara Vanilla from Madagascar, Chinotto from Savona, Pistachio from Bronte. The intent is to make food culture. 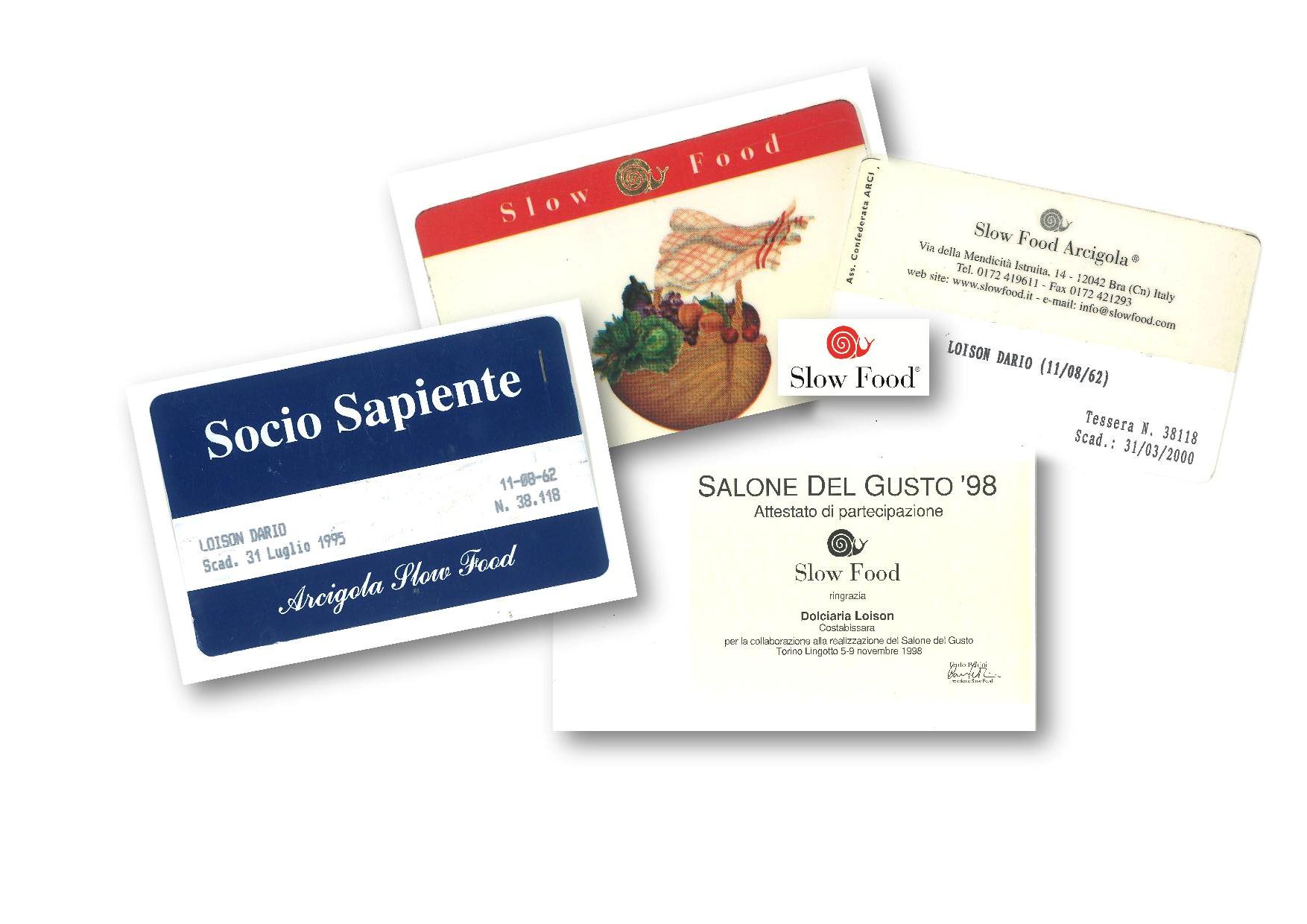 The press is writing more and more often about Loison

On April 24, 1996 the first article about Loison on “Bargiornale” and “Il Sole 24 ore” comes out. We are pleased to remember this date because for the first time Loison is also mentioned by nationally renowned newspapers. This fact testifies to the company’s ability to offer quality content, in addition to its products. In the following years the company continues to be talked about, confirming itself as the protagonist of stories of excellence. On July 16, 1999, for example, an article by Giuseppe Caravita, entitled “And Vicenza starts the web community” in the “Internet & Networking” section of “Il Sole 24 ore”, represents the first testimony of Dario’s digital vision Loison. 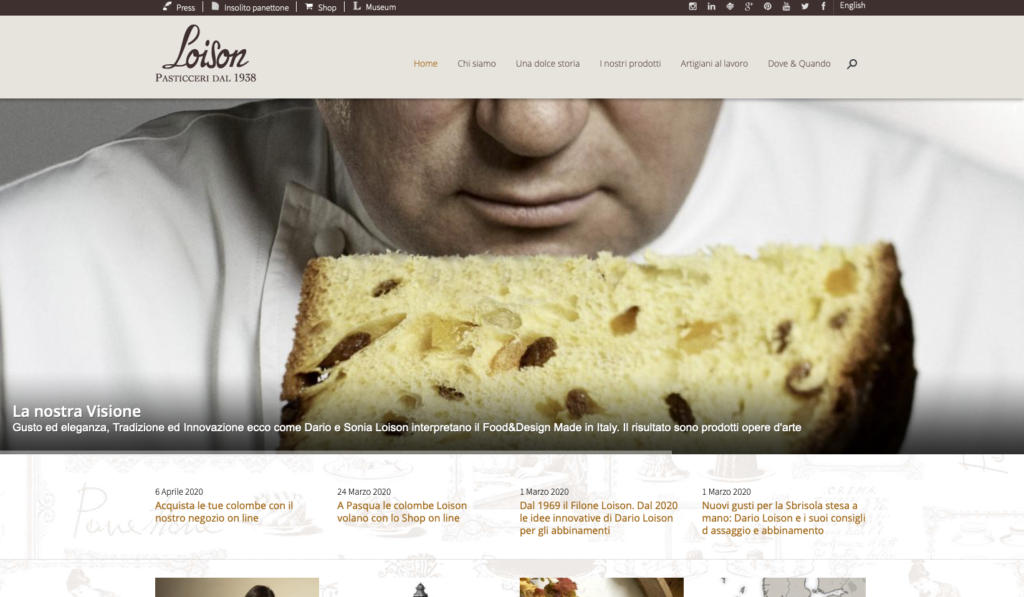 The second half of the nineties saw the use of information technologies and the expansion of a whole new world: the Internet, increasingly asserting itself. The digital revolution opens new unexplored scenarios. Loison is able to understand the extent of the changes taking place and the importance of a solid and well-targeted communication strategy. For these reasons, the company decides to invest in the new opportunities now available. It develops and makes its website available online, gaining a record among Italian companies. Later, in those same years, Loison understood that to make the most of the digital world, he needed the other. The company thus makes its first two sales through the use of the Web. Orders come from international customers: Sweden and Japan. Loison panettone begin to travel the real world after making themselves known through the digital one. 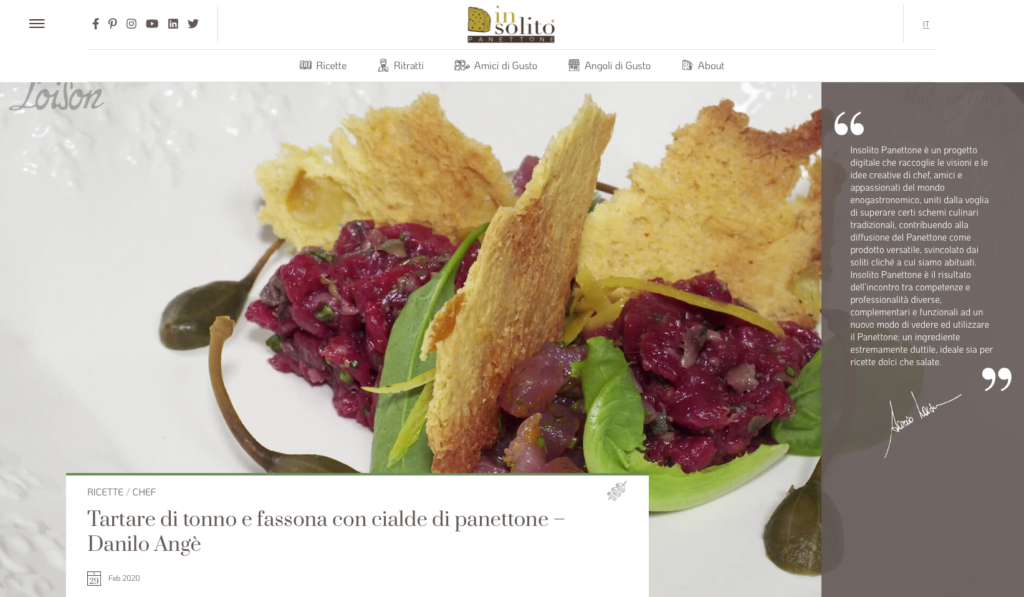 In the early 2000s Loison began a close collaboration with numerous starred chefs, from Herbert Hintner to Peter Brunel, from Danilo Angè to Fabrizio Ferrari. This made it possible to create an extraordinary background of panettone “adaptability” on all dishes, both sweet and savory. Over the following years and precisely on Friday 23 October 2003, the idea of “Unusual Panettone” was born at the Cinque Sensi Restaurant in Malo, in the province of Vicenza, an evening organized by chef Morgan Pasqual with a menu based on panettone only. Today Insolito Panettone is a Loison portal dedicated to chefs, friends, bloggers and fans of the food and wine sector who make innovative recipes. Shared by passion and by interacting online, the lovers of taste contribute to the spread of Dario Loison’s idea of “clearing” the Panettone with the usual clichés and using it as a versatile ingredient on all dishes.

After over 75 years and three generations of experiences, Made in Loison is a distinctive trait of quality and excellence.
From the 7 early employees, today there are on average 25/28 permanent employees, to which are added seasonal workers and external professionals who collaborate daily with the company to create ever new projects and ideas. 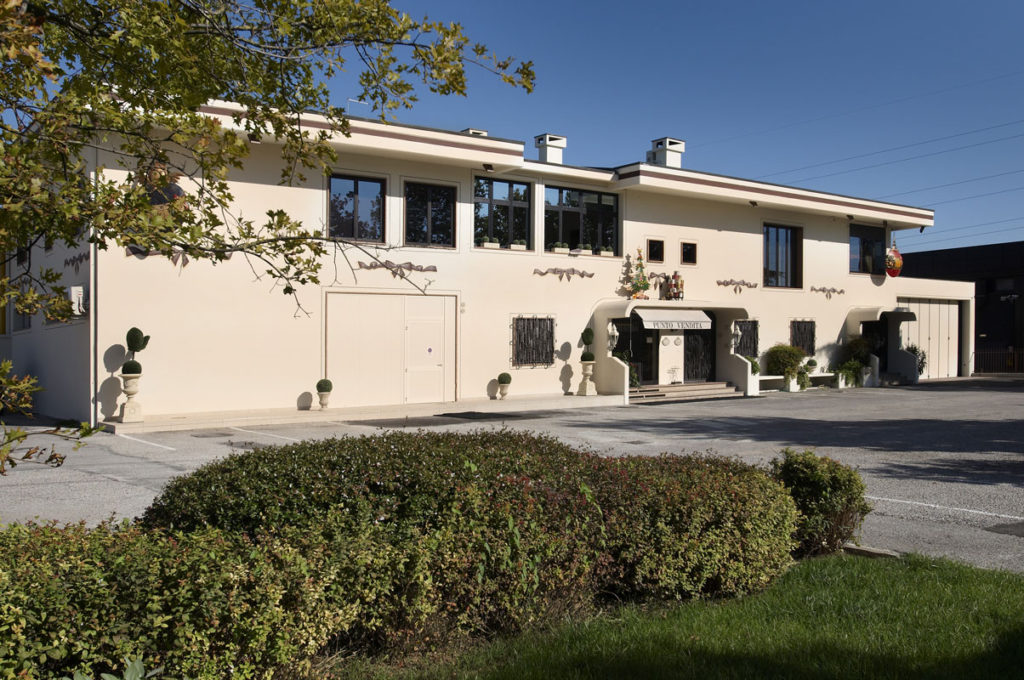